Despite the changes in my life that is viewed by many to be detrimental to reading, 2014 was a very good reading year for me; in fact, the best when it came to number of books read.  I read a total of 38 books, the closest I ever came to accomplishing my goal of 50.  I could have finished 40 books before the year ended, but I got lazy during the Holidays, and I got hooked on the Serial podcast, which you should really listen to, by the way, if you haven’t already.

I’m going to share my 2014 reading stats from Goodreads, which I only just noticed this year.  It’s interesting that, though I read the most books this year, I read the most number of pages in 2012 (12,225 pages as compared to 11,557 pages read in 2014). So, the secret to reading more books in the year:  Read shorter books! 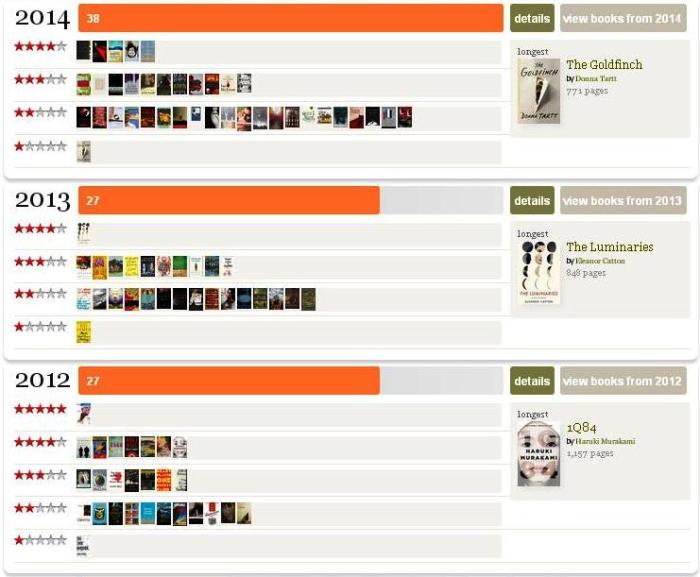 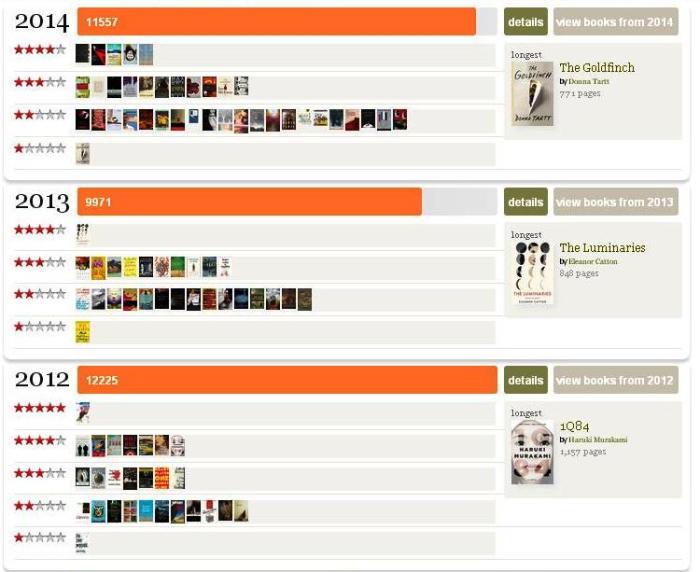 But seriously, in terms of length, according to goodreads, the longest book I read in 2014 was The Goldfinch (Donna Tartt), which was also what I considered the worst book of 2014.  And yes, I did read a lot of novellas or relatively short novels last year, namely, The Comfort of Strangers (Ian McEwan), Professor Andersen’s Night (Dag Solstad), Snow Country (Yasunari Kawabata), a few Haruki Murakami novels, Missing Person by 2014 Pulitzer Prize Winner, Patrick Modiano, and a few by Gabriel Garcia Marquez.

Some of the things I noticed about the books I read last year:

Books I expected to like more than I actually did (which means I was a bit disappointed):

Books I enjoyed more than I thought I would (a.k.a, surprisingly good reads):

It’s hard to choose my favorite book in 2014, but if I had to I guess it would be A Constellation of Vital Phenomena (Anthony Marra).  The worst book, bar none, The Goldfinch (Donna Tartt).

The book I would recommend to anyone (if they had the time and the patience): House of Leaves (Mark Z. Danielewski). 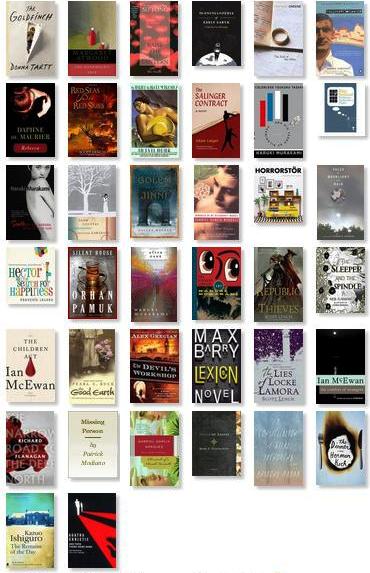 The Golem and the Jinni; A Constellation of Vital Phenomena ; Two by Haruki Murakami; Silent House; The Encyclopedia of Early Earth ; Rebecca; Hector and the Search for Happiness; Adios Señor:  Two by Gabriel Garcia Marquez; A Handmaid’s Tale; The Goldfinch; The Dinner; The Remains of the Day; The End of the Affair; Lexicon; The Salinger Contract; The Shape of Water; Tales of Moonlight and Rain; Snow Country; The Devil’s Workshop; Colorless Tsukuru Tazaki and His Years of Pilgrimage; House of Leaves; The Children Act; Horrorstor; And Then There Were None; The Lies of Locke Lamora; The Good Earth; Missing Person; Red Seas Under Red Skies; The Republic of Thieves; In Evil Hour; The Comfort of Strangers; The Sleeper and the Spindle; The Narrow Road to the Deep North; The Strange Library.