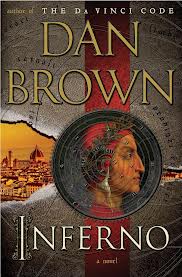 Brown, that is, not Alighieri.

In the 4th book of his famous Robert Langdon series, Dan Brown has his unlikely hero running around a famous, historical European city with a beautiful and intelligent young woman, being chased by some world famous organization, looking at architecture, art and literature to look for clues to solve a world-threatening danger.

If that plot sounds familiar to you, that’s because it’s the standard plot in every Robert Langdon novel.

This time, in Inferno, Robert Langdon finds himself in Florence, Italy, where he tries to save the world from an impending plague outbreak designed by a famous, but insane scientist obsessed with Dante’s Divine Comedy, namely, Inferno.

As usual, the nerdy academic (is there any other kind?) finds himself in an unlikely adventure, with the aid of a brilliant young doctor (who also happens to be a child prodigy), Sienna Brooks. Touring all the famous landmarks of Florence, and later, other European cities, Langdon uses paintings, ancient texts and architecture to figure out where to go next and how to solve the problem at hand.

Inferno, as well as the other novels in the Robert Langdon series reads less like a novel and more like a National Geographic special on conspiracies and secrets behind ancient architecture, art, and text. With his eidetic memory and knowledge in history and art, symbolist Robert Langdon seems to know every little useless factoid there is to know about the Old World art and architecture – a skill, that surprisingly, has helped him save the world countless times!

Though not as controversial as the Da Vinci Code, and not as gruesome as Angels and Demons, Inferno still managed to ruffle some very sensitive feathers.  Dan Brown has annoyed (some) Filipinos by painting a not-so-nice picture of their country’s capital, Manila.  A character in Inferno who traveled to Manila hoping to make a difference in the lives of poor people was put off by the city’s 6 hour traffic jams, heavy pollution, rampant crimes, stench, and overpopulation, likening the city to nothing less than “the gates of hell.”

Surprisingly, this did not sit well with some Filipino readers – a government official in particular, who allegedly wrote Dan Brown a letter chastising him for his insensitive description. Apparently, he did not have anything better to do that to read Dan Brown’s novel.

Inferno, like all Robert Langdon novels is designed to be fast-paced and easy to read.  The short chapters and  generalizations about history, art, and literature make for pretty interesting reading if you don’t know much about those topics, but otherwise, the novel was repetitive and predictable.  Once you’ve read one Robert Langdon novel, you’ve read them all.  Serves me right for reading it!  (Admittedly, I’ve not read the 3rd book, The Lost Symbol, but I’m pretty sure I know what the plot is going to be like).

So what’s next for Robert Langdon?  How about an adventure through Greece using Plato’s The Republic, or something related to Alexander the Great?  And this time, maybe have the United Nations involved, or NATO, as the token international organization that’s out to get him. Doesn’t sound too far-fetched, if you ask me!