Hours after reading Julian Barnes‘ The Sense of an Ending, I’m still at a loss as to what its true meaning is. I’m finding it extremely difficult to describe this book, and to make sense of the whole thing.   This novel bothers me more than I care to admit. 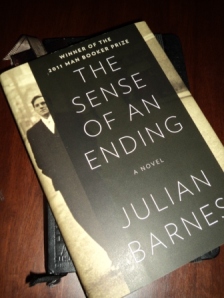 The 2011 Booker Prize-winning novel is only 163 pages long, but don’t let it fool you – it is far from short, and definitely not simple.  It can, and will get under your skin.

In The Sense of an Ending, when the 60 something-year-old narrator, Tony Webster, suddenly receives a mysterious letter from a long-forgotten, seemingly insignificant person from his past, he looks back on his life to piece together scattered memories of people and events from his youth, and to try to make sense of the unexpected turn of events.

By recalling his past in order to get answers, Tony starts to question some of his long-held beliefs and opinions about his friends, relationships, and life in general.

What I really appreciated about this novel was Tony’s insights on life; on youth and the ideas of waiting for life to begin; in hoping that life will be the stuff of literature; of growing old and letting life just happen; the inaccuracies of memories; the treachery of nostalgia; of forgetting, and remembering.

What did I know of life, I who had lived so carefully?  Who had neither won, nor lost, but just let life happen to him?  Who had the usual ambitions and settled all too  quickly for  them not being realized?  Who avoided being hurt and called it a capacity for survival?  Who paid his bills, stayed on good terms with everyone as far as possible, for whom ecstasy and despair soon became just words once read in novels?  One whose self-rebukes never really inflicted pain?….

A passage which hits a little too close to home…

More than once in the novel, Tony was described as someone who “just doesn’t get it,” and I’m afraid that in that aspect, we have something in common.

I don’t think I get it either.  I get the plot, and I think understand the ending, but, I just feel that there is something more to this novel – something between the beginning and the end that is just beyond my grasp.

Unfortunately, this is not something I can say for myself.

The Sense of an Ending – Julian Barnes

10 thoughts on “Making Sense of The Sense of an Ending”